Challenges -
GE/Alstom are world specialists in the development, design, testing and manufacture of transformers. These transformers, despite some weighing in excess of 400 tons, are very specialist pieces of equipment. GE/Alstom have been designing, building and testing these for years. 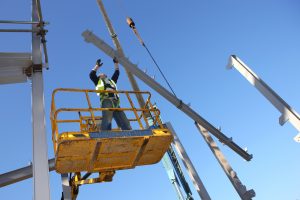 Following a review of their current site layout GE/Alstom identified a remodel of their Stafford site would allow for the construction of a large Faraday Cage which would be used for testing.
As a faraday cage on such a large scale had never been constructed, and due to the sensitive nature of the work undertaken on the site, GE/Alstom as Client also decided to act as Principal Contractor, Designer.

Results -
Continued compliance with statutory regulations and with the CDM Regulations 2015.